This week ended in death. My husband’s grandmother passed away yesterday after several years battling cancer and nine months in hospice. No need for condolences, there was much pain in the last several months and she has finally been released from something that could hardly be called living towards the end. The black cat gif is in honor of her and her love of black cats.

Reading – If you missed it, I finally finished Dracula and I actually enjoyed a classic for once. I’ve now started my book club selection for the month which is completely un-Halloween related. I hope to knock it out shortly and maybe even brave another spooky classic.

Tim Horton’s Pumpkin Spice Iced Capp has strong pumpkin flavor. I think I prefer a little less intense pumpkin flavor in my coffee but it was enjoyable nonetheless.

Movies – Two movies this week. I think it important to mention here that I barely watch one movie a month so this is a movie action packed couple of weeks for me. This year has apparently flip-flopped my usual style, reading LOTS of paranormal/horror books. I guess I’ve traded it for movies this season.

Note – I know it unwise to watch a movie immediately after reading the book it is based upon but I did it anyway. The most frustrating thing was that there were moments when the dialogue stuck closely with the book and then other parts where the journal entries were completely butchered to make this a weird love tale. Mina and Lucy were both made to be much more vapid than either were and none of the male characters were as enjoyable as they were in the book. It may be the one movie I don’t like Anthony Hopkins in as I strongly disliked his Van Helsing. It did however make me miss when movies had to do something besides CGI for their special effects.

Well that was my successful second week of October. How is everyone else fairing in their holiday fun?? 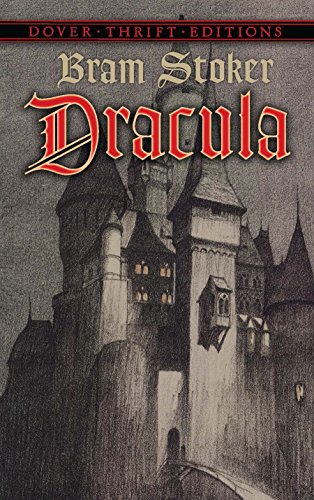 Ah, yes. I have tackled yet another classic! Even better, this one was actually enjoyable.

If you’ve heard the tale of Dracula, it’s probably not actually far off from the story we have here. I refused to watch Bram Stoker’s Dracula with my husband until I was finished this because I was afraid it would have spoilers. Spoiler is; I already knew all the spoilers.

There’s no need to review the plot line since everyone already knows it. At times I was impressed with Stoker’s forward thinking, Mina states that one day brave women would propose marriage to men, and then other times it was your usual way of thinking about women back then, dainty and in need of manly protection. I’ll still give Stoker the credit he deserves as I’m sure the very idea of women proposing to men probably ruffled a few feathers back then. (He was probably thought of as crazy for that idea alone. Thinking up the story of Dracula being the second most outrageous thing to come out of his mind.)

The format is something we see here and there but not one I usually enjoy. Journal entries, letters and newspaper articles. Here, it works and it works very well. Some entries were pretty lackadaisical but for the most part I was entertained and wondering what shenanigans the Count would come up with next.

If you’re like me, and don’t usually enjoy the classics, I would recommend giving this one a try.

Victorian London, 1888. Dracula has married Queen Victoria and vampires have become public knowledge. Not only do the warm (living people) know about their existence, but it has become socially acceptable in London society to receive the Dark Kiss and join the undead. And it’s not just the upper class turning, street urchins can change too for a little blood. Vampires are slowly filling all the political ranks and streets and the living are becoming the minority.

There will always be resistance to the new regime and the mascot of this small, unidentifiable resistance is Jack the Ripper. He kills vampire prostitutes in the slums and has all vampires on high alert.

Genevieve is an ancient vampire of a pure bloodline. Not of that diseased creature, Vlad Tepes and his ill-begotten children. She works in Whitechapel as a physician. She takes care of the lowly prostitutes that the Ripper is targeting. She tries to save everyone that she comes across human or vampire. Despite being old, even by vampire standards, she has not become cold to humanity.

Charles Beauregard works for a human high society secret club. The Diogenes Club. They have sent him to find out all he can about the Ripper.

Separately, they are both great characters. Together, they do decent detective work. Their interaction with one another is more entertaining than their quest to identify the Ripper. But, overall I enjoyed my time with them both.

There is an info dump in the beginning of approximately 80-85 pages and that almost put me off of reading it entirely. I persevered through however and was rewarded for it. This isn’t anything mind blowing but I would suggest giving it a chance if you like historical fiction, horror, vampires and appearances of other legendary classic literature characters.