Most people who are not from Michigan (and maybe some who are) probably think that a night out in Detroit is a horrible idea. What a lot of people don’t know, is that Detroit is hard at work reviving itself and the results have been pretty great.

Founders Taproom in Detroit is a great place for a night out.

The food was fantastic with the second best beer cheese I’ve ever tried. Prices were very reasonable for brewery food. There was nice seating both inside and outside. Outside even had giant heaters and fire pits which was fantastic as it was a chilly night.

The bell of the ball for my husband was getting to have KBS 2018 on tap.

Overall, it was fantastic. We definitely recommend giving it a try if you’re in the Detroit area.

Brewery rating: 4 out of 5 stars

While on vacation, Riptide Brewing Company served as the almost nightly relaxation retreat. Mr. Cupcakes & Machetes and my uncle both love craft beer, I don’t personally drink anything carbonated because of my weird tongue (carbonation hurts) so I played DD most nights. This makes the atmosphere of a brewery almost as important as the beer itself when you’re hanging out there nightly.

There was a variety of styles of beers to choose from and an event calendar on the chalkboard as well. They have a trivia nights like most breweries, food trucks almost every other night and an ugly Christmas sweater party that we would unfortunately miss. There were a few snack items available to munch on such as; swordfish + kingfish dip, pretzels & a beef stick.

Having spent so many nights at the brewery, I believe the boys managed to try every beer on the menu. Pictured in the flight we have: Struck by Thunder DIPA, Kraken DIPA, Wishmaker Raspberry Blonde (charity brew for Make-A-Wish, empty) and Kabana Kolsch (empty). In the pint glass is Drop Anchor IPA, which was a definite favorite. 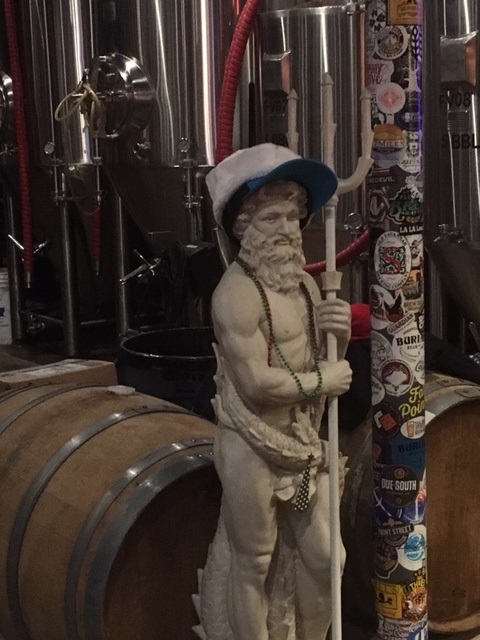 They make the top of the list for best mascot at a brewery so far.

The only real complaint is the poor quality of their growlers. Both growlers purchased broke in the exact same manner, around the bottom. Both broke while not even moving. There appears to be bubbles in the glass. This was a major bummer as we were excited to bring Florida beer all the way back to Michigan to share but alas, we had to purchase bottled beer from other breweries in the area. (I mean that isn’t exactly a hardship but the boys wanted to share their love of Riptide.)

Nevertheless, we highly recommend you check out Riptide if you happen to be in the Naples area. Riptidebrewingcompany.com.

Michigan may be the mecca of craft beer, but that doesn’t mean that other states don’t have skin in the game too. Whenever we travel out of state my husband (and my boss) have to find the local breweries and try as many beers as possible.

We began one of our beer adventure nights at Yazoo Brewing Company. All beer tried was mediocre and the service was bad. They must be doing something right though as they’re available at almost every restaurant in Nashville. Unimpressed, we took our little adventure a short walk down the road to Jackalope Brewing Company.

Here’s one brewery you definitely do not want to miss when you hit Nashville. It had a great laid back atmosphere. The staff was incredibly friendly and made us feel welcome. The most important component being, they had great beer. Mastering good merch for people to take home is almost a different trade all in itself. Jackalope mastered that too. We took home several stickers for our own in-home bar.

Another great thing that we noticed Jackalope doing; promoting charities. At the time we went, a portion of the proceeds of their beer, Lovebird, went to charity.

You can find Jackalope canned at a few restaurants in the area as well. Also tried and approved of; Thunder Ann (American Pale Ale) and Bearwalker (Maple Brown).

If we could have found a way to bring beer home on the plane, something from this brewery would have made it’s way back to Michigan.